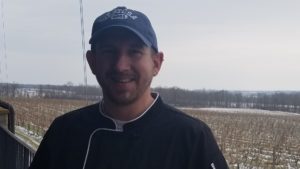 Chef Carl Bray is a Finger Lakes native who has had the opportunity to enjoy, and benefit from, all that this region has to offer. Carl has seen firsthand the agricultural, artisan, and hospitality industries boom over the past 20+ years .He finds that as a chef there is nothing more exciting than to be a part of such a success! Carl discovered his ambition for the kitchen and passion for food at a young age and recalls wonderful home cooked meals growing up. Now a dad himself, Carl is able to impart those same home cooked values upon his children. One of his earliest jobs was as a prep cook for a YMCA camp, and he found himself in a kitchen ever since. Because of this, it was natural for him to continue his education in culinary arts, and he is a proud alumni of Alfred State culinary program. Prior to joining Ventosa, Carl was the lead chef at Geneva on the Lake for nearly 12 years. That position gave him the opportunity to take part in many charitable events, cooking demos and competition’s. He feels honored to cook, garden, plan, and promote the wonderful ingredients this region offers along side some of the regions most creative and driven chefs by taking part with organizations such as the Finger Lakes Culinary Bounty and Chefs Collaborative Garden.